A lifelong Leeds supporter in need of lifted spirits.

A Leeds United legend who could do just that.

A personalised video message that brought the two together.

After a tough year for Ivor Patterson, his daughter, Kelly Moore, wanted to give her dad a boost. As an avid Leeds fan since the Revie era in the 60s, a memmo from former Leeds United player, Tony Dorigo, was the perfect fit.

Ivor has had many serious and life-changing illnesses, and unfortunately at the beginning of the year his feet developed necrosis.

“That has meant he’s gone from being very active to having both feet in heavy bandages, multiple operations, having to live downstairs in one room and rely on a wheelchair and family to get around,” Kelly says.

Having no specific occasion to book the memmo, Kelly simply did it to ‘cheer Dad up’ and send him ‘something that he’d never expect’.

“It was also something that I could do that fit with his circumstances,” she says. 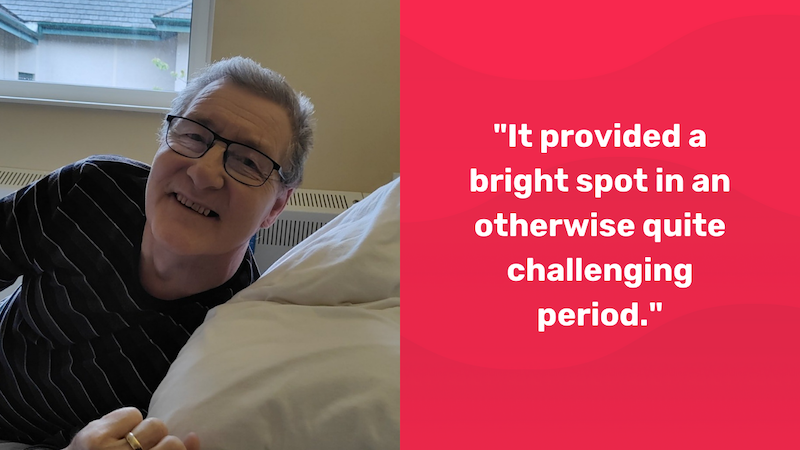 When Kelly first saw the memmo, she instantly knew how delighted her dad would be.

The best part of his memmo experience, according to Ivor himself, was not only the surprise of it, but the fact that “Tony would take the time out to do it.”

Confirming this, Kelly notes that her dad played the video repeatedly, showed it to many people and fellow Leeds fans and chatted about it ‘incessantly’.

“It was certainly a lift he needed. It provided a bright spot in an otherwise quite challenging period.”

When it comes to more serious messages, like that of a life-changing illness, Tony Dorigo says he’s “always thankful to have the ability to brighten someone’s day, to lift their spirits in whatever small way I can, via a friend or loved one’s thought via memmo.me to show they’re loved and supported. Powerful.”

CEO and Co-founder of memmo.me, Tobias Bengtsdahl, says: “What’s truly special about this is not only the emotion Ivor felt whilst watching his memmo, but the lasting impact it clearly had and the many proud, mood-boosting conversations it led to for him. I know this is a special memory that he will carry with him forever.”