Derek and Kyle, father and son, best friends, now patient and caregiver. Together they received a video message from one of their favourite broadcasters, Buck Martinez, as a birthday gift.

For the past five years Derek has been bedridden in a long-term care home, but is a man who continues to ‘beat the odds’ with whatever life throws at him.

“The hospital restrictions and isolation from family and friends has been exceptionally difficult,” Kasha, Kyle's partner, says.

“Sports have been his only escape,” she continues, saying how Derek and his son ‘both love and talk sports every day’.

Kasha says Derek ‘doesn’t require any materialistic things’ for his birthday, and so “a memmo was the perfect opportunity to create what he really needs, and that is a memorable experience.” 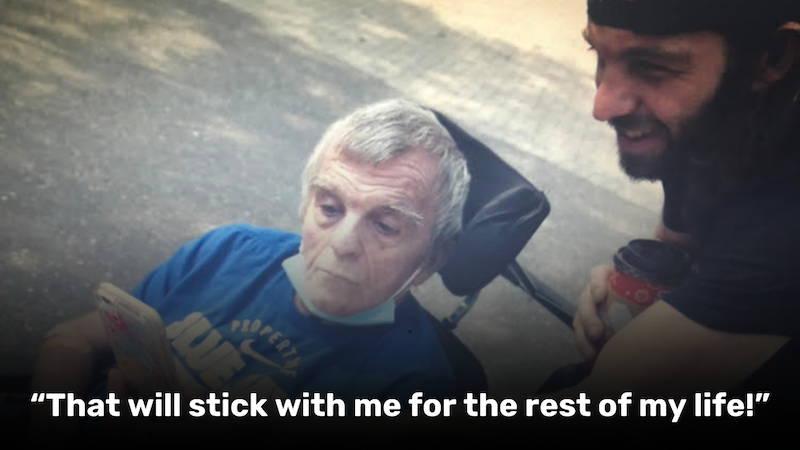 Buck Martinez, Broadcaster, Former MLB Player & Manager, says: "When I first signed up with memmo.me I did it out of curiosity more than anything,” and asked himself how “a message from me could have an impact on someone's life?”

But after almost a year on the platform, he continues that he’s “enjoyed the process much more than I ever would have imagined knowing that once in a while I have put a smile on someone's face."

Kyle ‘felt incredible’ that someone who he’s watched ‘almost every night for the past 20 years’ was speaking to him and his father directly, ‘and speaking with emotion’.

“THAT VOICE! ‘Hello Derek and Kyle.’ That will stick with me for the rest of my life!” he says.

Derek is ‘a man of few words’, but becomes ‘really passionate’ when talking about sports or reminiscing about old times. “All you have to do is look at the last second of his reaction to the memmo... that image speaks a thousand words,” Kasha says.

Tobias Bengtsdahl, Co-founder of memmo.me, says: “It goes to show that even the simplest of celebrations, one’s birthday, can turn into a beautiful lifelong memory. I am touched to know of the impact this memmo had on Derek and Kyle.”

Kasha suspected the video might have made ‘these two strong guys a bit emotional’. Well, it did: “This special gift moved Derek to tears.”

The memmo 'did exactly what it was intended to do’.

“It created a memory and positive boost to Derek and Kyle’s spirits. They’ve been through so much and I think it was really nice to have someone they admire hear their story and share it with them.

“The response was a memory I will cherish forever.”